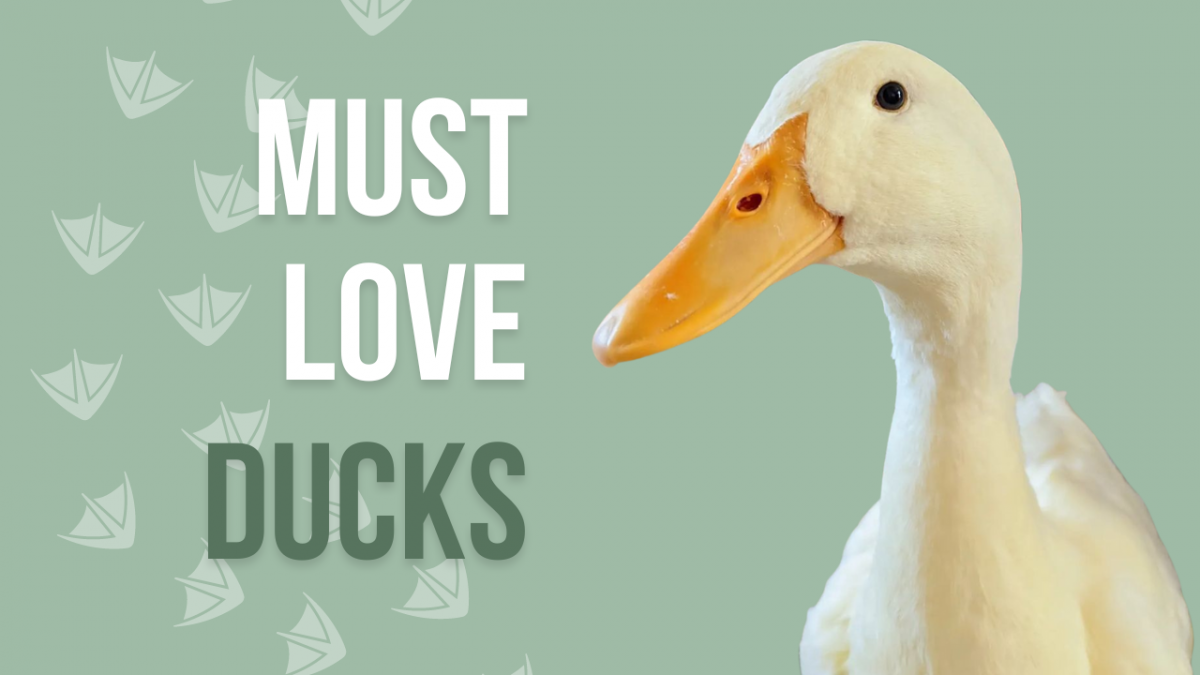 Change-makers are often motivated by love, and Abby Petersen’s love story is punctuated with web-footed friends. She is a shining example of identifying a need, and doing everything she can to make a difference. Her story illustrates how the Direct Service, Philanthropy, and Community Organizing & Activism Pathways can come together to make lasting change.

Six months later on April 21st I got married. It’s actually my 10 year anniversary this year. I went on my honeymoon, and the first thing I did when I got back was go back to check on my ducks at that pond. I sat down and looked into the pond and I saw a little yellow duck among the mallards. He wasn’t there the week before and he definitely didn’t fit in. He was struggling and looked like he was drowning. The other mallards were hurting him and he was missing feathers. I yelled at my husband to help him. He picked him up and put him in my lap. That tiny duckling snuggled into my arms and shivered. I looked at his feet and saw scabs and I knew his body was injured. I took him home so I could take him to the vet.

I went to the vet and she told me he was a Pekin and he was about 1-2 weeks old. Pekins get dumped at ponds after Easter when families buy them and realize they are messy and expensive. Pekins aren’t the only domestic ducks that get dumped, but they are one of the more common ones after Easter. She said if I hadn’t grabbed him he would have died. I asked her what I should do with him. She said I could find him a person with a farm, or a backyard flock, or just keep him. I called around and tried to find someone but no one would take him. I lived in an apartment so I started looking into how to keep an indoor duck. I found out some people keep indoor ducks. At this point this duckling was imprinted on me, and followed me everywhere. I loved him so much. I named him Toby.

He loved Cheerios, watching TV, and going to the park- as long as he knew where I was. To keep an indoor duck they need diapers so I ordered him a diaper. Life goes on. I wound up getting a little dog who Toby loved. They played together and napped together.

Then I had a son. Obviously I wasn’t going to get rid of my first son

Some people get rid of their pets when they have kids- obviously not me. Toby joined the family photos!

We wound up moving to Las Vegas for my husband’s school, then Sacramento once as he graduated for my his new job. Wherever we moved, Toby came. We truly considered him our first child. I know it sounds crazy but I loved that duck. He meant the world to me.

A few weeks after moving to Sacramento the most devastating thing happened. Toby was a jumbo Pekin. Pekins are prone to leg problems because they are bred to grow big, fast. He was walking and for whatever reason he tripped, and he displaced a tendon. After that his left leg was unable to move, leaving him crippled and unable to walk. He wasn’t in pain, but was no longer mobile, so I made the decision to keep him alive until he showed me he was hurting.

He still wanted to be with me constantly. I carried him everywhere. I kept him in his dog bed to keep his chest elevated, because when they can’t walk it puts pressure on their chest which makes them prone to respiratory infections.

I carried him everywhere with me for a year, even when I got pregnant and had a daughter. It was so much work. I worked long hours, had a baby, but I did it because I loved Toby so much.

About a year and a half later he showed signs of pain. He started getting respiratory infections, and they were getting harder to treat. I could see he was hurting. So one night I came home late from work, I sat him on my lap and looked into his eyes and said ‘are you ready, buddy? Is it time to say goodbye?’ and he nuzzled in my arm like that first time I held him. And I cried and cried. I woke up my husband and I told him that he needed to call the vet first thing in the morning so I wouldn’t have time to change my mind.

This is the last hug I gave him. They put him to sleep using medications that just let him drift off to sleep. Every night during his life I would sing to him ‘You Are My Sunshine.’ So while he drifted off to sleep that final time after they gave him the euthanasia drugs I sang ‘You Are My Sunshine.’ His eyes shut as I finished the last verse. It was the hardest thing I ever did in my entire life, and a choice I honestly thought I would never be able to make.

He was cremated and he sits next to my bed, on the nightstand that he used to sleep under. I commissioned a portrait of Toby that is next to my kids pictures on the wall. The dinosaur and palm tree match the ones on his very first diaper.

In his honor, I rescue ducks.

I believe every single person has their own beautiful purpose. Everyone needs their own ‘thing’ so that everyone is covered. Whether you are passionate about horses, or the homeless, dogs, or dumped ducks. Everyone needs something they care enough about that change can be seen everywhere.

So I choose ducks.

I rescue and rehabilitate ducks. I feed ducks at ponds. I rescue and find them homes. And I hope more people find things they are passionate about so that there can be change seen in every single part of the world. Every cause. Animals, humans, the trees. If every person cares about one thing the world would be a better place.

And I am grateful every single day that I took that little yellow duck home. Even though there is a hole in my heart because he is gone, I know I’m doing something good because of him.”

Abby is a Davis County resident, AmeriCorps alum, and founder of the small animal rescue Must Love Ducks.

Duck dumping and the plight of the flightless waterfowl