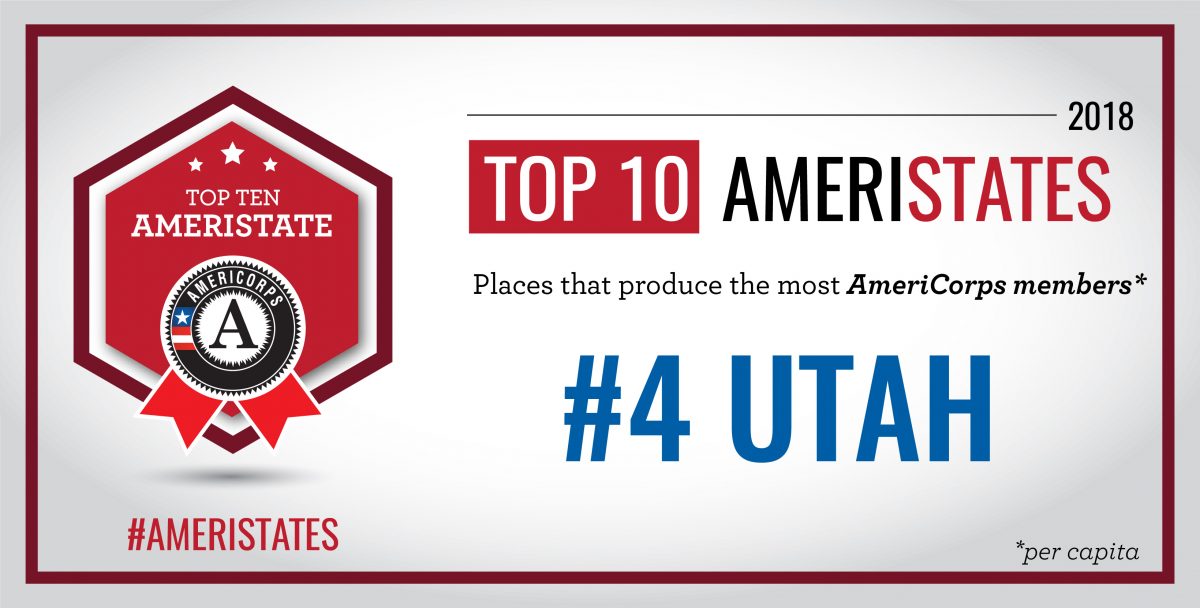 [SALT LAKE CITY/PROVO] — When it comes to enrolling in AmeriCorps, Utah residents rank fourth among states, according to new data released today by the Corporation for National and Community Service (CNCS), the federal agency that administers the AmeriCorps program and leads the nation’s national service and volunteer programs.

“This report quantifies what we already know about Utahns—that they are passionate about reaching out in their communities,” said LaDawn Stoddard, Director of UServeUtah. “Finding ways to help others is ingrained in our culture and I hope Utahns will continue to dedicate themselves to this high level of service.”

Since AmeriCorps was formed nearly 25 years ago, over 16,000 residents of Utah have given more than 15 million hours of service to their country and received more than $36,180,000 in scholarships. This year, CNCS will invest more than $15,730,000 in national service projects in the state, including funding for more than 1,800 AmeriCorps members.

“Congratulations to Utah, Provo, Salt Lake City, and all our 2018 AmeriStates and AmeriCities” said Chester Spellman, federal director of AmeriCorps. “By taking the AmeriCorps pledge, Utah citizens are building a brighter tomorrow. Their service as AmeriCorps members exemplifies what it means to be an American. I salute every AmeriCorps member for their dedication and determination to ‘get things done’ and encourage other Americans to make the same commitment.”

Every year, 75,000 AmeriCorps members serve through 21,600 schools, nonprofits, and community and faith-based organizations across the country. These citizens have played a critical role in the recovery of communities affected by Hurricanes Harvey, Irma, and Maria. They also tutor and mentor young people, connect veterans to jobs, care for seniors, reduce crime and revive cities, fight the opioid epidemic, and meet other critical needs.

Since 1994, AmeriCorps members have provided more than 1.4 billion hours of service and earned more than $3.6 billion in education scholarships, more than $1 billion of which has been used to pay back student debt. Those interested in joining AmeriCorps can learn more at AmeriCorps.gov/Join.

A growing body of research shows that service has an effect on more than just the communities served, but also on the members themselves. AmeriCorps alumni credit their year of service for developing leadership skills that bridges divides solves problems, and opens doors to opportunities that advance their careers and education. In addition, research shows that alumni gain skills and are exposed to experiences that communities and employers find valuable.

Public, private, and nonprofit sector employers have demonstrated their commitment to hiring AmeriCorps alumni, signing on to be an Employer of National Service. Launched by CNCS in 2014, the initiative builds a talent pipeline connecting AmeriCorps and Peace Corps alumni with more than 500 leading employers including Disney; Farmers Insurance; MasterCard; United Way Worldwide; the City of Philadelphia, the State of Montana, and NASA.

UServeUtah, the Utah Commission on Service and Volunteerism, is the state’s central coordinating body for service and volunteerism. The Commission is responsible for developing, implementing, and sustaining a vision and culture of civic engagement and national and community service within the state. UServeUtah does this through promoting volunteerism; administering National Service programs; connecting people with opportunities to serve; building organizational capacity for effective volunteer engagement and; participating in strategic initiatives that mobilize volunteers to meet local needs.

AmeriCorps is administered by the Corporation for National and Community Service, a federal agency that engages millions of Americans in service through AmeriCorps and Senior Corps, and leads the nation’s volunteering and service efforts. For more information, visit www.NationalService.gov.