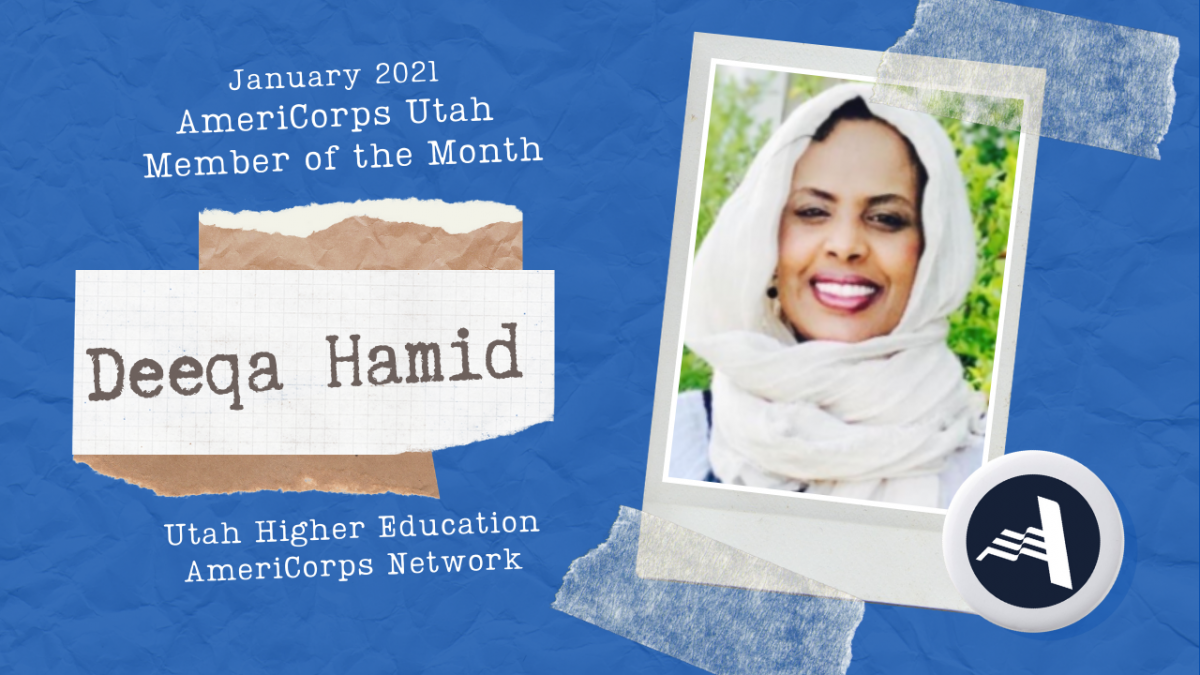 Each month we recognize an AmeriCorps member serving in Utah for going above and beyond the pledge they took to “Get Things Done.” This month we are proud to recognize Deeqa Hamid who is serving at Salt Lake Community College (SLCC) as part of the Utah Higher Education AmeriCorps Network (UHEAN).

Deeqa Hamid is part of two programs: Student Leaders in Civic Engagement (SLiCE) and Civically Engaged Scholars (CES), both programs of the Thayne Center for Student Leadership, Life & Community Engagement at SLCC. Deeqa served on the 2020 Civic Leadership Conference Committee and played a critical role in connecting the committee to community organizations, organizing the conference and its logistical tasks, and building capacity within the committee.

Deeqa represented SLiCE on the Conference Committee through actively participating in the preparation of the conference, as well as its execution. Deeqa spent many hours, starting in early August, in preparing the conference for her peers. Involving pertinent issues from the community and incorporating the Pathways of Public Service and Civic Engagement, as articulated by the Haas Center for Public Service, Deeqa specifically helped construct the acknowledgements recognized during the Conference and on its website, as well as introduce and facilitate the “Environmental and Migrant Justice” breakout session.

You can learn more about the Conference here.

The unique qualities of Deeqa include the identities she has cultivated throughout her life, including that of being a non-traditional and first-generation student. Through her lived experiences, the perspectives she articulates allows those around her to critically engage in self-reflection. The skill of asking thought-provoking questions to dialectically analyze what is being talked about is crucial to team-oriented projects, thus affecting others to conceptualize issues in ways that may be difficult if Deeqa were not present.

Another skill that Deeqa possesses is integrity to her stewardship, that of being a student leader during a time of much struggle and uncertainty. Deeqa understands her responsibilities and demonstrates competence through the completion of goals and objectives. Yet, if a mistake occurs, Deeqa holds herself accountable by acknowledging what occurred and then implements a plan to overturn the error, thus correcting and learning from the experience.

In addition to her involvement with Thayne Center programs, Deeqa has also helped orient and engage new students and has helped fellow classmates apply for scholarships through the Black Student Union. She is also cultivating a relationship with a new Thayne Center community partner, University Neighborhood Partners.

Cristobal Villegas, Civically Engaged Scholars Coordinator at the Thayne Center, thanked Deeqa for her leadership while presenting her with the award. “Thank you for being that example and continuing to progress. It hasn’t been an easy year this past year, but you keep going. It takes so much courage and so much valor, coming from Somalia and being one of the few black bodies in the room, and I want to appreciate that and honor that. So, continue to bring other people with you because that’s how change happens.”

Samantha Collins, Assistant Director at the Thayne Center, described how Deeqa has added value to their programs and to the student body as a whole. “She has been so incredibly involved in the past year in our office, but I think the more I get to know Deeqa and the more that we spend time talking about her future goals and what’s led her to Salt Lake Community College, it’s clear that civic engagement is something that has been so embedded in her life and is really important to her. I am so excited to see what that brings in the future as she continues to pursue a degree in social work. She has made such a tremendous impact through student leaders and civic engagement this past year. Her leadership has been really impressive and invaluable, not just for me as the coordinator of the program, but also for the group. It’s clear that she’s someone that the other students really look up to and value her opinion…Deeqa brings 200% every day…There’s so much that she’s doing to make an impact on our office and on the community. ”

“[Through the] AmeriCorps [Program] and SLiCE, I am serving my community. I accomplished what I thought I would never accomplish. I am closing a lot of gaps and doubts about myself. I am becoming braver by the minute, taking steps to grow and gain knowledge, understanding, and appreciation for myself and my community. I am learning my weak points and my strengths. I am improving my verbal communication, articulation, and mindset toward education and community. It was a wonderful blessing to be part of the programs and [to be] working with the AmeriCorps team at [SLCC], unbelievably engaging.

When I was new here…I was so scared. I didn’t know what to do and I was blind, you could say. I really learned that there [were] a lot of opportunities to engage and reach out to other fellow students and community organizations…I feel confident to say that I’m an AmeriCorps member…It gave me an identity, purpose, and meaning…What AmeriCorps is providing students like me, it’s really door opening and a big support.”

Special thanks to Cristóbal Villegas for providing the award nomination.

We extend our congratulations to Deeqa for being recognized as the UServeUtah AmeriCorps Member of the Month and thank her for her dedicated service to Utah communities.

What is AmeriCorps?
AmeriCorps is your moment to take the path less traveled, to break the status quo, to stop talking about the problem and be the solution. Join AmeriCorps and you can mentor and tutor kids, rebuild a community after disaster, help veterans, or work with local communities to alleviate poverty. There are thousands of opportunities to choose from, find the one that fits you.
>Learn More